Nescot students have triumphed in a national skills competition final, winning a haul of three gold medals and one silver in Computing and Media.

The results at the WorldSkills UK contest, held at The NEC in Birmingham from Thursday to Sunday, mean Nescot had its most successful year to date and was the top performing college in England.

"Every year I’m amazed by the amount of hard work our students and their tutors put in to prepare for WorldSkills UK," said Nescot Principal Sunaina Mann OBE, who travelled to the finals to support the teams.

"The competition gives them the opportunity to take their technical skills to the next level, but it also helps them improve their confidence, organisation, time management, teamwork and ability to work under pressure - qualities we know employers look for.

"The students’ medals are thoroughly deserved, and the whole college is extremely proud of them." 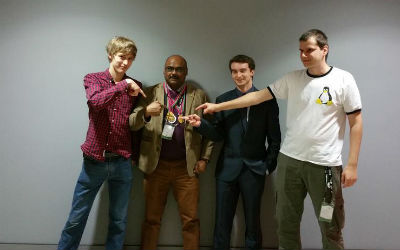 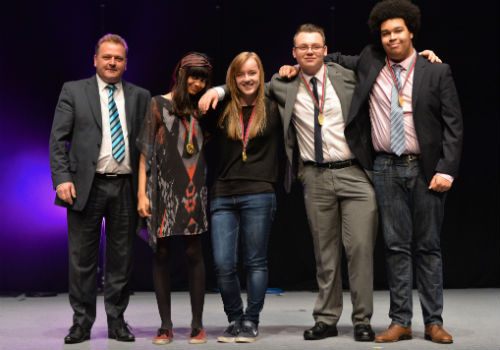 Anthony, who joined Nescot as a Level 2 student and is now in the first year of his Level 3, said: "I think the best thing about the competition is how everyone has supported each other – Shane and Razvan really helped me.

“I wasn’t expecting to win a medal, but I think even if I hadn’t I’d still be really happy, because it was an amazing experience and I learnt so much.”

Shane, who finished his Level 3 BTEC at Nescot in June with D*D*D* and won his category in the regional heats, got to the national final of the Microsoft IT Technician category last year but didn’t win a medal.

“I knew what to expect this year, so I worked really hard preparing for the final by studying six or sometimes seven days a week with my tutor Suresh,” he said.

“The competition was tough but I felt prepared. I think taking part in WorldSkills has improved my confidence a lot, and I’d tell any other student to go for it because you learn so much.

“I was so pleased to win silver this year, and I’m hoping to compete in the Network Security category next year. I’m also hoping to be chosen as part of the UK squad for WorldSkills in 2017.”

Razvan also praised Suresh for his support, with the tutor missing family events including his son’s tenth birthday, which fell during the finals.

Razvan lost his job as a full-time carer two months before the finals, and had to take on a part-time job in a warehouse to make ends meet as he prepared for the competition.

“I hadn’t heard about WorldSkills before I joined Nescot,” Razvan said. “Suresh suggested that I enter, and when I understood what the competition meant I decided to go for it.

“All the Nescot students worked as a team and we all tried to help and support each other as much as we could. I feel very proud to have won gold.”

Sage Lal, head of Computing, thanked tutor Suresh for his 'relentless pursuit of perfection'. He added: "These competitions are extremely tough, and require dedication and extensive training.

"The Computing team understands the significance of these competitions and the difference success can make to the students' progression and employment opportunities, and how important it is to build certifications as well as the knowledge required for qualifications.

"We are proud that the Computing department is ranked as one of the best in the country."

The Media team were tasked with filming a ‘day in the life’ feature on The Skills Show, and decided to take a creative approach, with a narrative and visual effects.

The students praised tutors Graham and Louise, and said they felt they would not have achieved a medal without their support.

Pablo described the competition as ‘intense and stressful’, but said he had learnt an ‘incredible’ amount during the three days.

“There was a lot that we wanted to do artistically that wasn’t possible to do to a high standard in the time available, so we learnt about time management and compromise,” he added.

“Personally, it’s also helped me to realise that a pre or post-production setting would be a better fit for me, so I’m thinking about my career options at the moment.”

Zainab added: “It was such hard work, but we’re really pleased that we won the gold and I’m proud of the standard of work we produced.

“WorldSkills has definitely helped me to improve my editing skills, and the finals helped us see what working in the industry would be like.”

Jodie, now studying Film Production at Arts University Bournemouth, paid tribute to her fellow students’ talents and the support of their tutors.

“I am over the moon that we won, and it was honestly one of the hardest but best experiences of my life,” she said.

“We did a lot of planning and preparation and drew up a schedule for the task, but a few things didn’t go as we expected so we had to learnt as we went and adapt our plans in some places.”

WorldSkills UK aims to drive excellence in skills through competition, with regional heats culminating in a grand final from November 13 to 15 which ends in a prize-giving ceremony.

This year’s finale saw an audience of 80,000 watching students from across the UK compete in categories from architectural glass and environmental science to visual merchandising and web development.

Nescot has a proud history of success at WorldSkills UK. This year 21 students competed at the regional level, with all of the seven who made it to the final winning gold or silver medals.

Below: Shane Carpenter with his parents 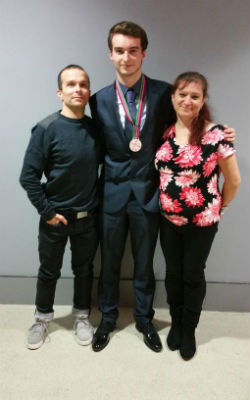 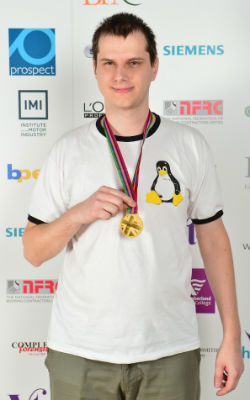 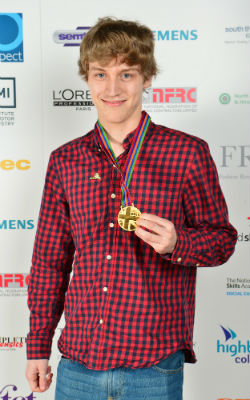 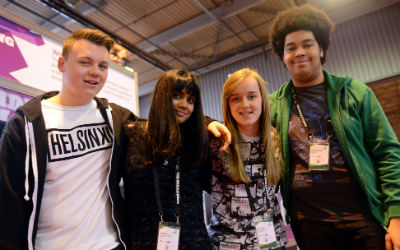