The second-year Film and TV students had worked in two crews to create The Sanctuary and The C Word, which were shot on location in the South Downs.

After screening each film for friends, family, staff and first-year and HND-level students, key crew members on each project were involved in a question-and-answer session on stage with section leader Louise Gaskin.

Speaking after the premiere, second-year student George Martyn, who directed The Sanctuary, described it as a ‘once-in-a-lifetime experience’.

“I literally can’t believe I’ve directed a film that’s being shown at BAFTA, it’s an unbelievable thing to have on my CV,” he added.

“The process of making the film was amazing. It was quite stressful in places, but actually I wouldn’t change it because you do learn from that.”

Psychological thriller The Sanctuary and black comedy The C Word, both written by Deputy Head of Media Graham Chalk, were filmed in East Sussex from October 18 to 24.

The Level 3 students were assisted on set by HND students, while Music Technology students helped with the film soundtracks and Visual Effects students worked on design for The Sanctuary.

The two crews then had a month to finish their respective films, which the students described as a tough deadline but one that helped them understand the industry better.

“The students have worked so hard on this project from start to finish and they should be really proud of the end results,” Graham added.

“Right from the start they’ve been professional and committed, from long days in poor weather when we were filming to a really high standard of editing at the end.

“We’re glad to have showcased the films in such a prestigious venue, and we’re already looking forward to the next project.”

You can watch the films online here. 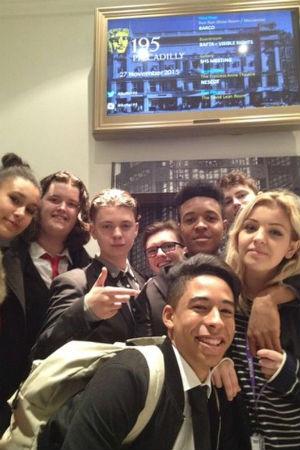