A Carpentry apprentice from Nescot has been named in the squad that will represent Great Britain in the first-ever under-21s European Deaf Football Championships this August.

Ross Ward, who has played for Fulham Deaf Football Club since he was 12 and also plays for Worcester Park FC, said he was 'really excited', and looking forward to the challenge.

He was initially shortlisted for the squad, and found out on May 14 that he'd made the final cut.

However, the championship is not funded, so the players need to raise £25,000 between them to cover the cost of their flights, accommodation and food.

"I am proud of myself for working hard enough to make the final selection, and I can't wait to wear Great Britain's kit this summer," said Ross, who is doing his Level 2 apprenticeship with Kingston-based firm Penn Contracting Ltd.

“It feels quite disappointing that we’re not funded, because we’re representing our country. But on the other hand, the fundraising has shown us how much people value what we’re doing and how supportive they are.” 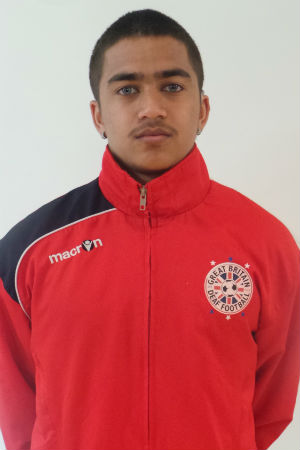 Ross, 20, plays as a winger, and has travelled to Turkey and Serbia with Fulham in the past two years to play in the Deaf Champions League.

He took part in a training camp with Great Britain in March, ending with a friendly against Team GB’s under-21s, and only has one seven-day training camp to go before the final squad selection in July.

Ross, who was born profoundly deaf, said: “For me, the challenges of deaf football are things like not being able to shout to your teammates to pass the ball, and balance is difficult for some players.

“Deaf football is becoming more widely known and supported, and I think if we play well in the tournament in Poland it will help to raise the profile of the sport higher.”

Ian Hill, Carpentry and Joinery Section Leader at Nescot, said: “Ross is progressing well on his course, and works really hard at college. We’re all delighted he’s made the squad and wish him the best of luck in the tournament."

There are about 25 active deaf football clubs in Great Britain, with the oldest, Glasgow Deaf Athletic Football Club, established in 1871 – only 11 years after Sheffield FC, the world’s first football club.

Great Britain Deaf Football is a self-funded voluntary organisation, and relies on donations and fundraising. They run a men’s team, a women’s team, a veteran’s team and the under-23 men’s team.

The senior men’s team has won three gold medals in the last five tournaments, including bronze in Hannover last summer.

This summer they’ll be playing in the newly-formed Deaf World Cup, but also need to raise £25,000 to cover costs including flights, accommodation and training.

The under-21s team was set up in May 2014 as a development opportunity to help young deaf footballers gain experience playing for their country, with the aim of reaching the senior men’s team.

To donate to help Ross and the team reach Poland this summer, donate online here.