Two teams from the second year of the Level 3 course are taking part in a competition run by the charity Young Enterprise, in which they set up and run their own business.

Team UniColour are producing heated clothing, while Team Optimum are selling a reusable stainless steel drinking straw, aimed at helping to cut the numbers of single-use plastic straws in circulation.

Team Optimum were among seven groups from schools and college in Surrey to pitch their business idea to three entrepreneurs in a Dragons’ Den-style event at Canon’s headquarters in Reigate.

“We gave a presentation and then answered questions about our strategy and how we could make the business successful,” said Ellie, Deputy Managing Director of Team Optimum.

“We’ve learnt a lot from doing that, and we got lots of advice about how we can improve. We’ve taken that on board and made some changes already.”

The group decided to create their product, the Stainless Sipper, after learning about the ways in which plastic affects the environment.

An estimated eight million tonnes of plastic end up in the world’s oceans each year, with one study projecting that rubbish will outweigh fish by 2050.

Student Matt said the team had been affected by watching the BBC’s nature documentary Blue Planet, as well as a video of scientists removing a straw from a turtle’s nose that went viral in 2015.

“It’s easy to just not think about the impact that you as a person has on the environment,” added Amber. “When you see it all on the screen it makes you think again.”

The straws cost £4.50 and can be put in the dishwasher, although they are also sold with a cleaning brush. The business tagline is ‘Saving the planet, one sip at a time’.

The students started working on their businesses in September, as part of their ‘Setting up a small business’ unit, and will be working on it until May.

Team Optimum also raised capital by selling doughnuts at college, making £41.75 profit, and exhibited at a trade fair in Woking in September. Each team member has also bought shares in the company. There will be a further Dragons’ Den-style event in March.

The project is being run by Business section leader Christina Andreou, with advice and support from business expert Nicci Bonfanti, as well as Head of Department Rob Lockwood.

“This is a really great project for our students to be involved in,” said Frances Rutter, Principal and CEO at Nescot.

“The students are learning a huge amount about all the practical aspects of running a business, which will really help them in the next phase of their careers.

“I’m especially proud that Team Optimum have chosen to focus on a product that could do so much to help the environment.” 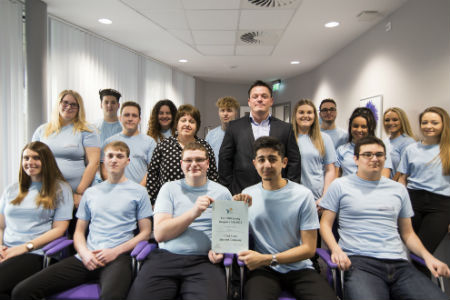