Nescot students are celebrating after their success at the finals of a national competition.

In total, 13 students represented the college at WorldSkills UK, including nine Computing students and 4 from the Media department.

Harrison Pike, Chilli Boughtflower, Ben Beckett and Cameron Barr have secured places in Squad UK, and will begin training with the hope of making the final team for the international WorldSkills competitions in Kazan next year. Luke Dyte is in the National Finalist Shortlist for WorldSkills Shanghai 2021.

Frances Rutter, Nescot’s CEO and Principal, spoke of her pride in the students’ achievements, and praised the Computing and Media staff for the support they’d given the students involved.

“To have 13 students reach the final of such a prestigious national competition is a brilliant achievement, and testament to their hard work,” she said.

“The reason Nescot takes competitions like WorldSkills so seriously is because of what the students get out of it: how much they learn, how much they improve, and how it impacts their future careers.

“They’re able to increase their technical skills immensely, which in turn supports them achieving their qualifications and gives them confidence and self-belief.

“It’s also a brilliant way for them to improve their skills in teamwork, planning, evaluation and communication, which we know employers across all sectors look for.”

Suresh Kamadchisundaram, Manager of Nescot’s Computing Academies and HE courses, coordinates the college’s entry to WorldSkills and praised the students for their success.

He added: "Our challenge now is to continue to mentor and support the four students who’ve reached the UK Squad, and we hope they’re able to make the UK team for WorldSkills International.

"I would also like to thank the computing team for identifying such a talented group of students."

“The students worked so hard, and the improvements they’ve made since their success in the regional WorldSkills UK competition is amazing,” she said.

“They’ve all come such a long way, and I’m looking forward to seeing their success in their future careers.”

WorldSkills is aimed at promoting excellence in technical education through competitions, with categories ranging from construction to visual merchandising and web development.

It comprises regional competitions followed by a national final, held this year at the NEC in Birmingham on November 15 and 16, as well as a biennial international competition.

Nescot has a proud history of success in WorldSkills, winning gold, silver and bronze medals.

Last year Computing apprentice Shane Carpenter made it to WorldSkills International in Abu Dhabi, winning a Medallion of Excellence, and this year he and HE student Cameron Barr won Medallions at EuroSkills in Budapest. 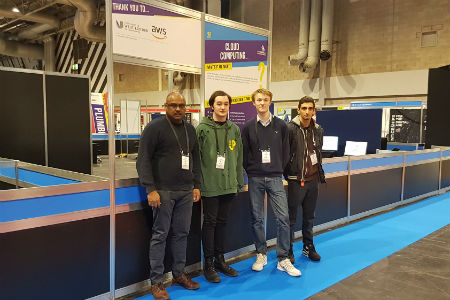