A Nescot student is aiming for gold at a major athletics event in London next month.

Ciara Kennedy, who has already won 11 medals and two ribbons at county and regional events, is competing in the Special Olympics Greater London Regional Indoor Athletics contest in Lee Valley.

Her goal is to qualify to take part in national or international Special Olympics Games, being held in Liverpool in 2021 and Berlin 2023 respectively.

“I’m a bit nervous, but I definitely want to win a medal,” said Ciara, who studies on the Entry Level 2 Further Education pathway.

“I really enjoy training each week, because you get to meet people and try out new sports. It’s given me a lot of confidence. Being good at athletics makes me feel very happy.”

Ciara has been running since she was in Year 9, and competes in the 100m, 200m, standing long jump and the relay. Her most recent medals include two silver for 200m and a bronze for the 100m.

Ciara previously attended St Philip’s School in Chessington. She loves football, playing as a striker or in midfield, and supports Manchester United.

“College is quite different from school, but we have a lot of people to help us,” Ciara said. “I like doing lessons in ICT, English and maths, and the teachers are really good at explaining things.

“Before I came to Nescot I was nervous and I thought no one would like me or they’d think I had something wrong with me, but it isn’t like that. The best thing about Nescot is that I can be myself.”

Lisa Moynihan, Head of Foundation Learning at Nescot, said staff aim to create a positive, friendly and supportive environment for their students, while also challenging them to reach their potential.

She added: “We’re really proud of all the success Ciara’s had so far, and hopefully by next month she’ll be able to add to her collection of medals.”

The Special Olympic’s flagship event is the World Games, which is held every two years and alternates between summer and winter games.

The Special Olympics Greater London Regional Indoor Athletics competition is being held on November 2, and is expected to include more than 260 athletes taking part in 28 different sports.

The event is the last in the Special Olympics Great Britain competition schedule for 2019, and is the flagship event for the London region. 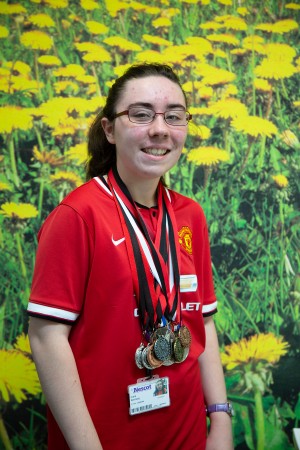