Nescot’s Business students triumphed at a regional competition last night (March 12), winning the top spot and three other prizes with their invention.

Their team, Aspire, was named the best company at the North Surrey Young Enterprise Company Programme Showcase with their self-watering plant kit.

The team will now represent north Surrey at the Surrey County Final on May 8, ahead of the south-east contest and finally the national finals in July.

“They have a great product, but they’ve worked really hard as a team to make it a success and they’ve learnt a lot about business in the process.”

The second-year Level 3 Business students entered the national Young Enterprise competition at the start of the academic year.

They held events including Beat the Keeper and sold doughnuts to raise enough money to buy their materials, as well as each buying 25 shares in their company at £1 each.

Their product, Plant Pottles, is a self-watering kit for growing plants. They made it themselves from sustainably-sourced glass, and have already made sales of more than £300.

The students took tests to determine who was best suited to each role within the company, and developed their own structures, branding, strategies and mission.

The competition is extra-curricular, and the students were also supported by Nescot governor Margaret Martin who became their business advisor.

“I’ve learnt that it takes a team to run a business,” said Freddie, the group’s Managing Director. “Everyone has different strengths in different areas, so it’s important to recognise that.

Sales Director Jessica said the students had taken a ‘one team’ approach, in which everyone takes an active role in selling to customers regardless of whether they had been designated a sales specialist.

“Being part of the process has really helped me with my self-confidence,” she said. “I work part-time at an estate agent, and I’ve gone from doing administration to leading property viewings.”

For the competition on Tuesday night, the students had to submit a company report, create an advert and prepare and deliver a four-minute presentation.

They were then interviewed by judges from companies including Proctor and Gamble and BAE Systems.

As well as winning the overall prize and being judged to have the best advert, Aspire was runner-up in the ‘best presentation’ and ‘best digital presence’ categories. 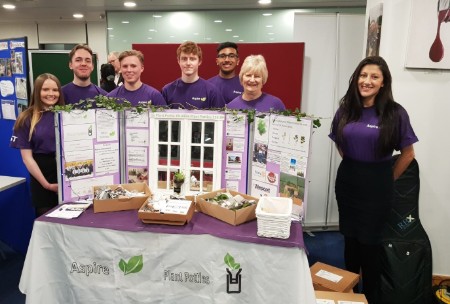 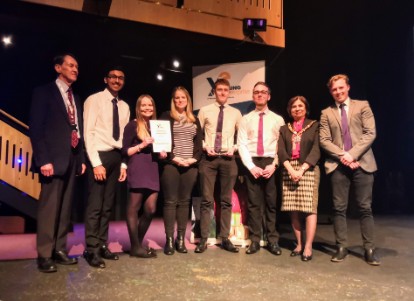